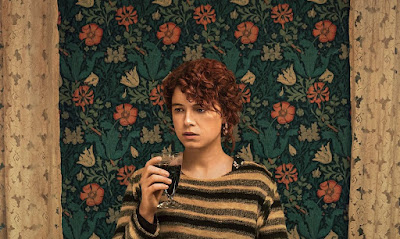 If Quentin Tarantino has a fetish for feet and Christopher Nolan has a fascination for the concept of time, then writer-director Charlie Kaufman has an obsession with constructing complex relationship dramas. With his directorial debut 'Synecdoche, New York' and his follow-up 'Anomalisa', he has explored what it means to be human and how love can affect both yourself and others around unlike any other filmmaker has done before. And here, in the Netflix Original film 'I'm Thinking of Ending Things', Kaufman continues the trend of dealing with these themes in a surprisingly unique way that doesn't feel derivative of his previous work in the slightest. The movie, based on the 2016 Iain Reid novel of the same name, follows a young woman (simply credited as "The Young Woman"), stuck in a relationship full of misgivings, as she travels with her new boyfriend to his parents' secluded farm.

To put it simply, 'I'm Thinking of Ending Things' is one of the most unconventional films out there, it is extremely original in terms of how it delivers its story. The best way to describe it is by saying the film has two stories: the first one is the surface-level story it gives you, enriched with detail and engrossing information, and the second story is the one audiences fill in, giving their own interpretation on what is happening. This leads to an ever-changing film, a movie that gives you a different experience each time you watch it. When it comes to pinpointing the specific genre, it is near impossible. It is an infrequently darkly funny comedy and an unnerving thriller, it has a sense of underlying creepiness, something that isn't normally classified as horror nor is it scary but it is also skin-crawling, and is a tragic drama rolled up into one new genre, unique to this film. Much like how 'Parasite's genre is known as a Bong Joon-ho film, 'I'm Thinking of Ending Things' is a Charlie Kaufman film.

Performance-wise, the cast is astounding. The four lead and supporting actors (Jessie Buckley, Jesse Plemons, Toni Collette & David Thewlis) all deserve at the minimum an Oscar nomination. Buckley is magnificent as The Young Woman, delivering the best performance this critic has seen all year. Plemons is truly phenomenal as the boyfriend Jake, giving us a believable albeit borderline over-the-top performance conveying contradictory emotions without being too extreme nor bipolar. In their limit yet important roles as Mother and Father, Collette and Thewlis are the commanders of the screen. Whenever their moods change, so does the film's.

Given the film is primarily dialogue-driven, the screenplay had a lot weighing on it. To construct a dramatic piece that lasts for 134-minutes and have it be consistently engaging is a hefty task and yet, Kaufman does not crumble under the pressure. The poetic conversations throughout are so rich with thematic purpose, every line is not only relevant but also has a meaning.

In terms of Łukasz Żal's cinematography and Charlie Kaufman's direction, it could not be better if they tried. The Polish cinematographer shoots with film with such grace and precision. Each shot is appealing to the eye, absolutely gorgeous from the first frame. There is only one filmmaker working today who could write and direct a movie like this and not just make it work but also make it as good as it is. In the hands of Charlie Kaufman, he was able to take his signature arthouse and abstract style as well as harness his dark and expansive imagination and apply it to a story, that on paper seems quite straight-forward, and turn into a metaphorical and meaningful exploration of life. This is a movie that is as much about ending things than it is about love.

Although Charlie Kaufman's third directorial feature 'I'm Thinking of Ending Things' may be his most complex and inaccessible movie to date, it is also a wildly ambitious and superbly well-made film with phenomenal performances all around, an excellent screenplay, beautiful cinematography and great editing. This is easily both Netflix's best offering in terms of original content in quite some time and the best film of the year so far.