'The Guilty' Review
An Intense, Twisted and Fast-Paced Danish Mystery-Thriller 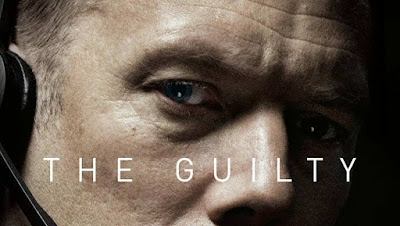 Set entirely inside an Emergency Services office, 'The Guilty' follows demoted police officer Asger Holm as he answers a call from a panicked woman who claims she has been kidnapped. With the phone as his only tool, he races against time to try to help and find her.

It is incredibly impressive how writer-director Gustav Möller and his co-writer Emil Nygaard Albertsen were able to craft tense sequences solely through dialogue. The mystery itself is very engaging and filled with twists and turns, a few are predictable but the rest are shocking and completely unexpected. The only flaw the movie suffers from is some minor plot holes in the screenplay, but it purely depends on how much they will bother you to whether you are willing to excuse them or not.

Majority of the creative choices in this film work fantastically. Using the sound mixing as a tool to captivate the audience is breathtaking, the editing is meditative and extremely well-executed, and the choice to have the entire 84-minutes set inside a little office is very effective.

Performance-wise, the whole movie's ability to work rests on one Jakob Cedergren. And with that huge amount of pressure weighing on his shoulders, it is astonishing that he didn't crumble. Cedergren did an excellent job selling the believability factor of Holm and the way he was able to make us feel empathy for such a morally flawed character is magnificent.The rest of the limited cast also deliver outstanding voice performances in their small roles.

Confined to a small office space and told in real-time, Gustav Möller's directorial debut 'The Guilty' is a fast-paced, intense and twisty Danish mystery-thriller with an incredible lead performance from Jakob Cedergren.