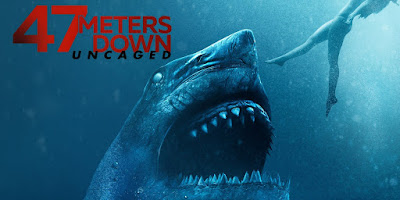 After the success of '47 Meters Down', a shark flick from 2017, making $62 million worldwide from a $5.3 million budget after a last-second theatrical release, a sequel was inevitable. Now in the sequel (only in name), '47 Meters Down: Uncaged' follows four teenage girls diving in a ruined underwater city as they quickly learn that the submerged labyrinth is also home to species of deadly great white shark, with a twist that they have evolved to be blinded.

With a premise that comes with a lot of promise, one would think the filmmakers will take full advantage of its setting and concepts and draw great moments of horror and suspense from it. Sadly, that is not the case. There is a good deal of fear that can be extracted from sharks, claustrophobic spaces and deep seas but this movie instead retreats to cheap jumpscares. Having the sharks be blind seems more like a cop-out to write around the water-dwelling villain always missing the movie's protagonists than a fun tool to build sequences around. There is only one scene of note that properly uses the concept, that is also the only smartly written moment of the entire movie.

'47 Meters Down: Uncaged' is a horrible yet unintentionally hilarious shark flick with a twist. From the moment a semi-transparent fish screams, putting the story into motion, this reviewer knew exactly how dumb and ridiculous the rest of the movie was going to be. If it's not boring you with its one-note characters, dull performances or seemingly first draft dialogue, it is annoying you with its headache-inducing, abrupt jumpscares and poor visual effects. Its saving grace is the rapid fast pacing and the unintentionally enjoyable moments.