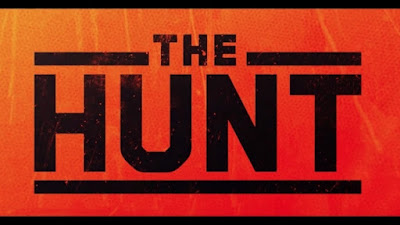 While watching Blumhouse's latest production, several movie comparisons were going through my head. The movie reminded me of 'The Most Dangerous Game', 'The Hunger Games' and strangely enough last year's 'Joker'. Not because they shared similar tones, story or genre but because like 'Joker', the darkly comedic action political satire 'The Hunt' is the most controversial movie of the year of its release.

The movie follows a simple premise: in the wake of a dark internet conspiracy theory, twelve strangers (quoted in the movie as "deplorables") awake in a remote clearing. Unannounced to them, a group of ruthless elitists are hunting the dozen humans for sport until one of the hunted turns the tables on her pursuers.
The first act is easily the best out of the three, showcasing the chaos and hilarity of the situation from the perspective of the twelve hunted. It is also here that it sets up the following act's tones and style -- using the cartoony violence to convey that it is set in an exaggerated version of our world, the violence will be gleefully violent, the gore will be bloody and gory and the comedy will be darkly hilarious, and the none of the information given to us can be trusted.
Although some of the many great surprises were given away in the trailers, it didn't give away the best ones.

While it does run out of steam in the second act (which is gracefully picked back up the third) and there are some minor plot holes, the movie as a whole is so darn entertaining that those problems can easily be ignored due how much fun you'll be having.

Betty Gilpin gives an incredible performance as Crystal, the main protagonist for most of the film. The little nuances she brings to the role are purely excellent.

As a satire, the way it delivers its messages is strangely simultaneously on-the-nose and unsubtle. While it's obvious a group of people are supposed to be Trump supporters, the infamous phrase "Make America Great Again" is never uttered by them or anyone else throughout the entire runtime. For every joke about the far-right, there is a joke directed towards the far-left. The controversy surrounding the movie is surely warranted; the extremist portrayals of classes and beliefs may upset some, but to be outraged by it and to go on witch hunts against it is letting the movie win given the circumstances of the titular hunt.

With a brilliant performance from Gilpin, smart writing from Nick Cuse and Damon Lindelof, brisk fast pacing, marvellous direction from Craig Zobel and a satisfying ending, the amusingly violent political dark comedy 'The Hunt' is an amazing yet underrated satire.
Labels: Reviews Reviews from 2020