'I Am Not Okay With This' Show Review 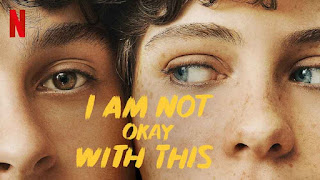 When a source material is adapted into a different medium, you would usually find it to be better than the adaption, and thankfully 'I Am Not Okay With This' is an outlier.
Loosely based off the graphic novel by Charles Forsman of the same name, set in a seemingly timeless world, the Netflix series follows Sydney, an often sarcastic and attitudinal seventeen-year-old, as she navigates high school while simultaneously dealing with the complexities of her family, her sexuality and mysterious powers.
While the show doesn't bring much new to the table in terms of ideas and themes, the way they are ultimately executed in this supernatural John Hughes-esque teen dramedy series is what makes this special and brilliant.
I have to give a round of applause to series creator and director Jonathan Entwistle as he was able to turn the graphic novel, which this reviewer thought was awful, and turn it into a great show. All of the bad elements from the former are non-existent in the show.
The series takes a lot of inspiration from a numerous amount of movies and tv shows popular in pop culture, but if you were to consider this show a knock-off of those other properties, you'd be sorely mistaken. The score is a big example of this. At times it does feel like it was emulating other show's themes and scores such as 'Stranger Things', but it never falls victim to nostalgia baiting.
The performances from the cast are nothing short of incredible. The way Sophia Lillis portrays the complex character of Sydney is impeccable. Wyatt Oleff, playing yet another character named Stanley, is immensely entertaining to watch and perfect in the role. Sofia Bryant, as Sydney's best friend (and crush) Dina, does a great job in her role. And Richard Ellis gives his seemingly one-note bully character Brad layers, oozing charisma while being an unlikable douche. The rest of the limited supporting cast do a good job in their respective roles.
The show has a hilariously dark comedic bite. Several scenes, most notably either the scenes featuring Stan or a bunch of scenes from the fifth episode 'Another Day in Paradise', had this reviewer in stitches.
The fifth episode out of this seven-episode season is the best out of the lot. Not only does it work as a semi-standalone episode; an episode that you can revisit without needing much about prior episodes, but it's opening scene perfectly encapsulates everything great about the show.
The soundtrack is phenomenal! Not only have the cherry-picked great songs from the past, but they have also created their own fictional band with a real album of really good original songs.
The editing is fast-paced, making each episode ranging from 20 to 30 minutes in length go by quickly, made for a very binge-able show. But it is also used effectively for story purposes, putting us into the mindset of our main character when she's angry, scared or embarrassed.
With an ending that'll leave you craving for more and a handful of unanswered questions, the second season is almost inevitable. Featuring incredible performances from the cast as well as an amazing soundtrack, great writing and fast-paced editing, when all those elements are put together, it makes for excellent must-watch television and a highly entertaining first season of 'I Am Not Okay With This'.
Labels: Reviews Reviews from 2020