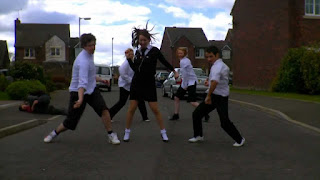 A 17-minute short film (that was later adapted into a feature-length movie titled 'Anna and the Apocalypse'), 'Zombie Musical' is everything you would expect from a horror-comedy-musical featuring flesh-eating zombies.
The acting from the cast is great. The actress who plays Anna gives an incredible performance as well as having a good singing voice. With the help of director and writer Ryan McHenry, she sells the arc of her character given the short time span. The limited supporting cast also did a good job.
The music is fun and filled with energy. The opening song was my favourite, especially due to the entertaining dance sequence that goes along with it as well as the comedy drawn from the carnage of the zombies attacking and eating people in the background as obvious Anna is singing and dancing.
The hand-drawn style opening credit was joyful.
The action-filled third act is the peak of the film. With Anna attacking and making her way through the hallway of a school while swarms of zombie walking towards, I couldn't stop smiling. The action was amusing and the practical blood and gore were impressive.
With music that is enjoyable to listen to, the action being entertaining, the tonal switch between horror and comedy never feeling jarring and strong performances from the cast, 'Zombie Musical' is the best short film I've seen to date. Director and writer Ryan McHenry has left behind a great legacy.

'Zombie Musical' is available to watch for free on YouTube
Labels: Reviews Reviews from 2020