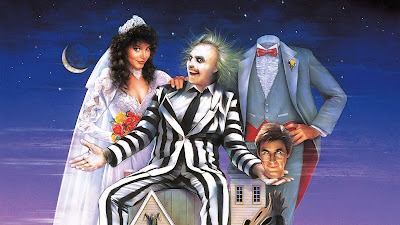 'Beetlejuice', which would be more appropriately titled 'The Handbook of the Recently Deceased', is undeniably bizarre and surreal.
After couple Adam and Barbara return home after being in an accident, they discover that they have died. Unsuccessful at scaring away the new family who lives their home, in a desperate measure, they seek the help of the crazed bio-exorcist Betelgeuse (pronounced Beetlejuice).
While this film may lack a cohesive plot, instead feeling like a collection of ideas that explore Tim Burton's outlandish perception of the afterlife for this film, it makes up for it with fun set-pieces such as the Day-O song and dance number, impressive practical effects of the creatures featured throughout, amazing costume design, brilliant hairstyling and make-up as well as committed performances from the cast, most notably Michael Keaton's unleashed and insane performance as the titular Beetlejuice.
Labels: Reviews Reviews from 2020