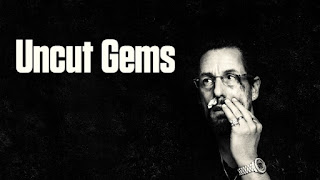 Best described as a tension-filled and stress-inducing thrill ride, ‘Uncut Gems’ is a divisive drama-thriller. The movie follows Howard “Howie” Ratner, an unlikeable, irredeemable and self-centred New York jeweller, who is always on the lookout for the next big score makes a series of high-stakes bets that could lead to the windfall of a lifetime.
The chaotic nature of the film is achieved by the brilliant sound design, disorienting score and the constant shouting.

Adam Sandler not only gives an outlier role compared to his work but also one of the best performances of his career. The charismatic actor completely sells the horribleness of his character.
The rest of the supporting cast, some with little to no acting credits to their name's, give incredible performances (most notably Kevin Garnett, playing himself, who has no business being as good as he is).

The movie's progression of time is unlike anything I've seen before. The pacing is a sprint while also flowing smoothly, making it hard to differentiate when each act begins and ends.
You're probably wondering "Will I enjoy this divisive movie?" And the best way to answer that question is with yet another question: "Will you enjoy a movie with hardly any likeable characters and 135-minute runtime filled with people yelling constantly over each other?" If your answer was "Hell no!", this will not be your cup of tea. If you were intrigued by the question and are willing to sit through a movie like that, I highly recommend watching the Safdie Brother's 'Uncut Gems'.
Labels: Reviews Reviews from 2020