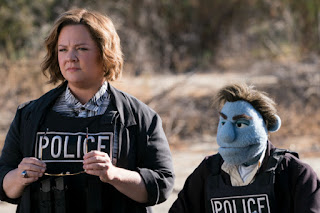 With the premise of "a comedy based in an alternative reality where puppets and humans co-exist, cast members of an old puppet tv show are suddenly and mysteriously being murdered", you would probably expect smart humour and thought-provoking social commentary but that isn't really what you get. A raunchy comedy that proves puppets aren't just for kids, 'The Happytime Murders' swaps out the smart humour for one-note yet mostly funny inappropriate jokes and thought-provoking social commentary for a blunt, in your face message and unsubtly.
This movie has some enjoyable performances from the cast, a semi-predictable story and is fun and self-aware enough to be a good time. Not nearly as bad as many critics have said it is but not what the great premise deserved.
Labels: Reviews Reviews from 2020