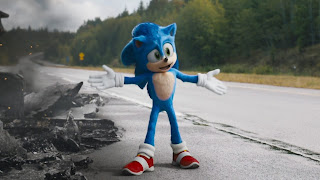 After the first disastrous trailer featuring the sleep paralysis demon looking Sonic, my expectations were very low. But upon seeing the redesigned titular character and positive reviews popping up online, my expectations started to rise. Now having seen the final product, I can gladly say ‘Sonic the Hedgehog’ is undeniably a blast.

While it does suffer from unoriginality and a predictable story, it’s easy to brush those flaws to the side. This movie didn’t need to reinvent the wheel nor should it. All it had to do is deliver solid laughs, entertaining action sequences and overall an enjoyable time, and it did exactly that.

The acting isn’t top-notch and nor is the writing, but it is leagues above what is found in many video game movies that have come out in recent years. The chemistry between characters, most notably between Sonic (voiced excellently by Ben Schwartz) and Tom Wachowski (a good performance by James Marsden), is fun. While it doesn’t come as a surprise to many who have seen both trailers but Jim Carrey without a doubt steals every scene he is in. The energy he brings to the moustache-twirling villain Dr Robotnik is impeccable. He almost feels more animated than the actual animated title character.

For a movie with it's CGI almost entirely produced within the few short months before the premiere, they are surprisingly well done; the work of the (most likely) underpaid and overworked animators paid off. Not only is the new look of Sonic superior to the humanoid looking Sonic, but if they were to keep the old design, the movie would be significantly worse. The older design would have clashed with Jim Carrey's energetic performance and well, almost everything in this movie.

If you walk into ‘Sonic the Hedgehog’ wanting something that’ll take itself seriously, you'll walk out sorely disappointed. A movie that both kids and adults can get a kick out of, this movie proves two things: 1. Not all video game adaptations are bad, and 2. Jim Carrey is back!