'Portrait of a Lady on Fire' Review

'Portrait of a Lady on Fire' Review
A French Masterpiece 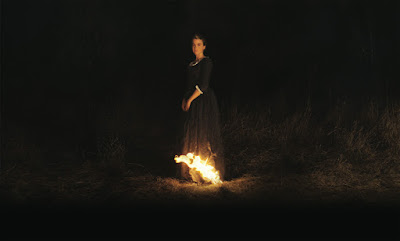 DISCLAIMER:
This review of 'Portrait of a Lady on Fire' will not feature any plot points as I advise to go into this film as blind as possible; not knowing anything. Do not read any plot descriptions online or any trailers as they'll give away too much of this film. You are welcome to click off this review if you don't want to know a thing about what I consider to be a masterpiece.

A beautiful masterpiece from the brilliant French screenwriter and director Céline Sciamma, 'Portrait of a Lady on Fire' is a phenomenal film that isn't for everyone.

The way 'Portrait' goes about the traditional elements of filmmaking, especially the score, is very unconventional. All the music in the film is diegesis; played by characters inside the movie. It was a very interesting choice on the director's behalf that also helped make the movie feel realistic and genuine.
While there is a bit of sexual and explicit content featured in the film, it's never there for the sake of nudity. It serves a purpose in the story and the characters' progression throughout.

The cinematography is gorgeous, each frame looks as if it was a painting; a painting worthy of hanging up in the Louvre. Cinematographer Claire Mathon captures this era in a vibrant and fascinating way.
Costume designers' Dorothée Guiraud and Agathe Meinnemare deserve a round of applause alone just for their collective work. Not only are the dress and clothing worn by the characters era-appropriate but are also pretty. The screenplay by Sciamma is both incredible and unlike anything I've seen before. The dialogue is used sparingly and necessarily, leaving majority of the runtime to be meditative and subtle. The performances from the leads are marvellous. Noémie Merlant and Adéle Haenel share an electric chemistry that makes each scene they share together, each interaction that more engaging.

This movie features multiple of the best moments put to film. Several scenes take a hold of you and don't let go; moments that override your body. The last ending, out of three fantastic ones given to us, is a prime example of this.
The titular 'Portrait of a Lady on Fire' moment is by far one of the best use of music in film history. A splendiferous piece of orchestra that builds tensely to a magnificent climax that is both breathtaking and tear-inducing.

While some may find this movie to be too slow or may not enjoy Sciamma's approach to this romantic period piece, this reviewer found 'Portrait of a Lady on Fire' to be yet another work of art that proves both 2019 was one of the best years for film and that foreign-language films are some of the best around.
Labels: Reviews Reviews from 2020