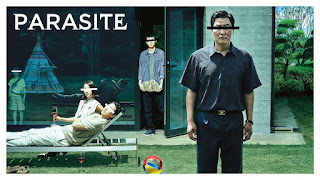 DISCLAIMER:
While this review will not talk about plot points from the film, its best advised to watch this movie blind. If you'd like to watch 'Parasite', I recommend not watching the trailer, not reading up anything about this movie online and clicking off this review.

Upon seeing the highly positive reviews, 'Parasite' had my curiosity. But it wasn't until it was nominated for and won Best Directing and Best Picture (along with two other highly prestigious awards) at the 92nd Academy Awards that it truly had my attention. Now having seen the movie, does it deserve the hype and praise? Absolutely!

Funny and tense, predictable yet completely unexpected; this film is unlike anything put to screen. It's hard to pinpoint what specific genre 'Parasite' fits into; it's a darkly funny comedy, a tense thriller, creepy but not in the traditional sense of horror and a tragic drama rolled up into one new genre, unique to this film. As a social commentary on economic and social classes, it's not only important in today's climate but it also works on every layer of depth.

There isn't a single weak link in this ensemble cast. The best performance in a film featuring phenomenal performances is Song Kang-ho as Kim Ki-taek. The range of emotions and his ability to make you believe you're watching something real, and not a movie, is spectacular. While the same could be said for everybody else in this cast, it's most evident in Kang-ho's performance.

Not only does the amazing editing helps make this movie's pacing feel lightning fast, making the two-hour fifteen-minute runtime go by as fast as a click of the fingers, but it also keeps it engaging. There is a five-minute montage just before the one hour mark that is easily one of the best five minutes in film all thanks to Yang Jin-mo's editing. Hony Gyeong-Pyo's cinematography is breathtaking. He captures this world in such a distinct, beautiful and haunting way. Joon-Ho and Han Jin-won's screenplay is purely excellent. Each line of dialogue feels necessary as well as deep and metaphorical. Composer Jung Jae-il's magnificent score complements and enhances each and every component a part of this work of art, it's the cherry on top of the well-constructed cake.

With every element put together by Bong Joon-ho's masterful direction, making them work together so seamlessly and perfectly, 'Parasite' is without a doubt the best movie since the inception of film.
Labels: Reviews Reviews from 2020