'Ready or Not' Review 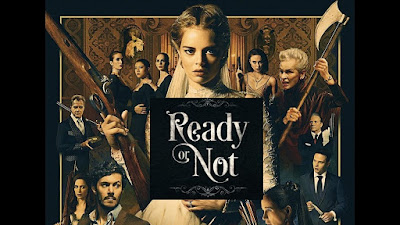 DISCLAIMER:
'Ready or Not' is a good movie to watch without having seen any trailers or read the description, if you would like to have a blank slate before watching this movie (which I recommend), I suggest not reading the following review.

"F*cking rich people!"
When I saw the first trailer for this horror-black comedy a few months back, it immediately became a movie I was incredibly excited for. Sadly I had to wait a couple of months after the film originally released in the US, dodging spoilers as much as I could. Now with the film finally showing in Australia, I can say it was more than worth the wait.
Set on her wedding night, newlywed Grace must play a game of hide-and-seek with her new in-laws, the Le Domas gaming dominion. But Grace doesn't realise is that they are out to kill her. What ensues is over-the-top horror-comedy fun that would make you cover your eyes in terror as well as laugh out loud.
The writing from Ryan Murphy and Guy Busick is brilliant. The unpredictability kept me on the edge of my seat. I never knew what was going to happen after each scene ended. If the film didn't contain its healthy balance of comedy, the movie wouldn't have worked as well as it did. While the film's most suspenseful; most intense scenes are some of it's best, adding a big pinch of devilish dark comedy gave the film a needed lighter tone and self-awareness.
The performances from the cast were incredible. Samara Weaving delivers an Oscar-worthy performance as Grace. She sells every emotion she conveys and once all hell let loose, she was a badass. Another stand-out is Adam Brody as Daniel, Grace's new brother-in-law. Just from a few mannerisms, it told a whole story. His character felt very grounded in reality and his choices felt realistic. The sister-in-law (Melanie Scrofano) is a hilarious incompetent cock-addict, the husband Alex (Mark O'Brien) was a great character with an interesting arc and the butler Stevens (John Ralston) was creepy and determined. The rest of the cast also deliver excellent performances.
While the score from Brian Taylor built tension brilliantly, when the scenes audio solely relied on the sound design, that's when I was truly terrified. The sound of creaking floorboards and the lack of any sound kept me gripping my arm-rest. The song choices were genius. 'The Hide and Seek Song' by Headquarters Music is eerie and the cover of 'Love Me Tender' by Stereo Jane is killer.
The production design and costumes are marvellous. With a reported budget of six million dollars, Andrew M. Stearn (credited Production Designer) and Avery Plewes (credited Costume Designer) did a great job with the small budget that they had.
With phenomenal performances from its cast, most notably the lead actress Samara Weaving, great and unpredictable writing, tension-building score from Brian Taylor, a tone that perfectly balances horror, (black) comedy and drama, impressive practical blood and gore, intense set-pieces, marvelous production design and costumes, and an unforgettable ending, 'Ready or Not' is a must-watch. Not only is it the best horror-comedy of the year, but also one of the best movies of the year.

Bonus Content:
I have finally done it! I have finally finished found my Sasquatch. A Sasquatch is a movie that I give five stars on my first viewing. I never rate a movie five stars on first viewing, it's not until at least the second watch through that I give out the perfect rating. But Matt Bettinelli-Olpin and Tyler Gillet's horror-comedy has broken the curse and has officially become my Sasquatch. Congratulations 'Ready or Not'!
Labels: Reviews Reviews from 2019