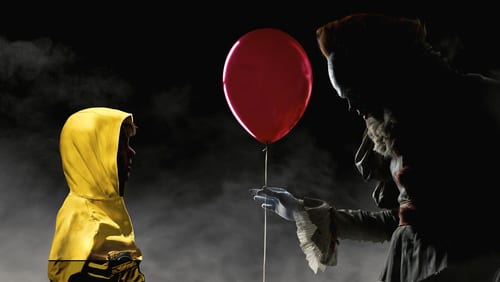 "Welcome to the Losers' Club, asshole!"
Andy Muschietti's 'It' (2017) is still a masterpiece, even on my 10th watch. The film is even scarier now than my first watch back in 2017 on opening weekend.
Bill Skarsgard's Pennywise the Dancing Clown is not only the best horror villain of all time, it's the best villain of all time, period.
Benjamin Wallficsh knocks it out of the park! His original score for the film is the best score I've ever heard. It emulates so many emotions at any given time. If the film wants you to feel fear just by music, boom! You're scared! If the film wants you to feel sad, boom! You're sad! How was the score not nominated for Best Original Score at the Academy Awards? This film should have been nominated for, and won, every award it could have possibly been nominated for, and won, at the 90th Academy Awards!
The acting is incredible! Besides the awesome performance from Bill Skarsgard that I mentioned above, other people of note that are phenomenal in this film are Sophia Lillis, Finn Wolfhard, Jaeden Martell, Jeremy Ray Taylor, Chosen Jacobs, Jack Dylan Grazer and Wyatt Oleff. Oh wait, that's the entire Losers' Club.
The cinematography is beautiful. The director definitely used his camera to his advantage to deliver some great scares. My favourite being the old librarian standing in the background with a big devilish grin on her face.
The screenplay is excellent. Filled with many quotable lines (an example is above) and memorable moments.
'It' (2017) is truly a masterpiece and the peak of modern-day cinema. Never have I seen a movie so perfect in every way, and I don't think I'll see a movie quite as good for a long time. This film is the best movie of all time!