'Dora and the Lost City of Gold' Review 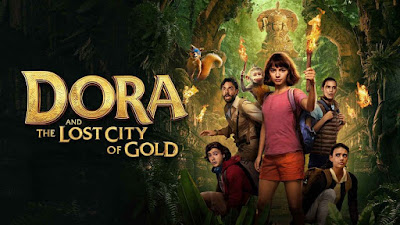 From its hilarious opening sequence to the scene where they sing about pooing to the hyperbolic gleeful song-and-dance number over the end credits (which I thought died out years ago), I came to realise that 'Dora and The Lost City of Gold' wasn't, in fact, a film but instead an acid trip, even Dora gets high.
The humour was hit or miss, but mostly miss. The opening few minutes had me in stitches but nothing afterwards made me laugh as much as the self-aware jokes did from the beginning of the film.
The CGI, while not the best, was good enough for what the film was.
The production design was impressive. The rainforests they ventured through looked lush and the ruins and temples felt ancient.
The acting ranged from fine to terrible. Michael Pena, who has shown time and time again that he is a great comedic actor, felt like he phoned it in. Isabela Moner was fine. I enjoyed her performance as the titular 16-year-old explorer.
The writing is probably the worst part about this movie. One minute, smart characters have an IQ of 12 and then the next minute, characters use information that they were never taught. Dora, a live-action cartoon of a character, felt out of place in a world populated with seemingly normal people. The only two things that semi-sell the over-the-top happiness and bizarre vibe Dora gave off were Boots and Swiper.
It's predictable plot beats left more to be desired.
Given I'm a fifteen-year-old boy, I'm not the target audience for this film. Children will most likely enjoy this romp. When leaving the cinema, a child was asked if they liked the film, in which the boy replied: "Yes, I thought it was awesome!".
There is a lot of potential to be had with putting Dora the Explorer in a real-life setting, but instead of delivering an enjoyable adventure flick starring every young kid's favourite fourth-wall breaker, they cooked up an overly long, poorly written, meh acted drug trip.
Labels: Reviews Reviews from 2019