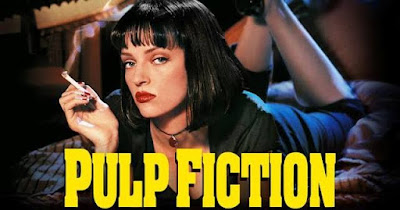 'Pulp Fiction' may not be Quentin Tarantino's magnum opus but it is still a very well-done piece of cinema.
Being split up into three different stories about the lives of two mob hitman, a mobster's wife and a washed-up boxer, Tarantino was able to tell a story like no other. Reminiscent of anthology films, the three stories, 'Vincent Vega and Marsellus Wallace's Wife', "The Gold Watch' and 'The Bonnie Situation', including prologue and epilogue, each varied in tone and genre.
The way he plays with the timeline of his film is pure genius. Half the fun, besides watching it unfold, is piecing the story together after watching.
The steady pacing was perfect right up until the last 10 minutes. The final scene was the only scene that I could truly feel the 2h 28m runtime but the acting and writing were so phenomenal that I can look past that problem.
The acting across the board was incredible. Standouts being John Travolta, Samuel L. Jackson and most notably Uma Thurman. Her performance as Mia Wallace was exceptional.
Despite not being a comedy, this film does feature some hilarious scenes. The best of them featured Christopher Walkins as an ex-POW. It felt me laughing hysterically.
The screenplay was amazing. Besides the incredible acting, the screenplay by Quentin Tarantino and Roger Avary truly carried the film. It's originality and use of language was astounding.
Quentin Tarantino's second film may not be his best work but it still deserves every accolade and piece of praise it receives.
Labels: Reviews Reviews from 2019