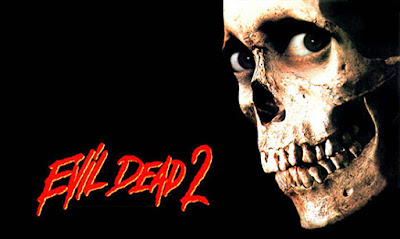 Hello Readers,
Continuing with my Halloween themed posts leading up to Halloween 2018, today I'll be reviewing my second favourite horror film, Evil Dead 2: Dead by Dawn (coincidence, I swear).
Evil Dead 2: Dead by Dawn stars Bruce Campbell and is directed by Sam Raimi, who also directed the Spider-Man Trilogy.
It is a parody sequel to 1981's Evil Dead.
What I mean by that is this movie is a comedic remake of Evil Dead. Practically the same plot, just funny (which the previous movie was not).

In my opinion, this was the movie that first had the tone that we are used to with the Evil Dead franchise. It introduced us to Ash Williams that we know and love and it also shows that you can make a great low-budget horror film and a great sequel (especially in the genre of Horror). First, let's talk about the tone of this movie. Evil Dead 2 introduced the viewers to a very unique mood that would be present throughout the next instalments in the franchise (excluding 2013's Evil Dead, I haven't seen it but I've heard it's just like the original 1981 Evil Dead, straight-up horror with a lot of gore). The scene that shows it the best is when Ash is fighting his possessed hand. This scene shows how great the tone is and Bruce Campbell is great at physical comedy and playing Ash Williams.

After watching this movie, I researched the budget of the production. I saw it was 3.5 Million USD, which is 10 times the budget of the original movie. It was amazing what they could do a low-budget. The make-up and special effects are amazing. The gore, overused in parts but again it's a parody of the original, was great and probably ground-breaking at the time of its release.

In the end, Evil Dead 2: Dead by Dawn is a great low-budget horror sequel that you can a lot of fun with. This movie, with the other two in the trilogy, helped inspire several horror movies such as The Cabin in the Woods and many more. The humour in this movie was funny and helped make the unique tone that we have come to love in the instalments that came out after. I love this movie and I highly recommend it to you. I'm giving Evil Dead 2: Dead by Dawn a 9.75/10.

I hope you enjoyed my second Halloween themed posts on this blog for Halloween 2018. Make sure to check back every Wednesday AEST leading up to Halloween to see new posts.
Next post will be another Letterboxd Review.

This is going to be a lot shorter then my Get Out bonus content but that doesn't matter.
Has anyone realised that Sam Raimi starts his trilogies with a great movie after making a great first movie he somehow makes an even better sequel, then he makes a not-so-great threequel. The movie isn't bad, just not as good as the two that came before it.
He's done that twice now, with The Evil Dead Trilogy and Spider-Man Trilogy. Did anyone else notice that? Sam Raimi, do you care to explain?
Labels: 1st Annual HorrorFest Reviews Reviews from 2018