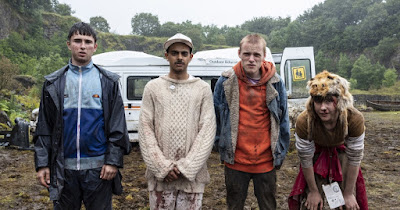 From its the opening scene and animated credit sequence set to Danny Brown's 'Ain't It Funny', the audience of 'Get Duked!' (otherwise known as 'Boyz in the Wood', a better title in the eyes of this critic), a Britsh dark comedy following four boys as they are hunted during their Duke of Edinburgh Award trip, get a perfect example of the zany tone and hip-hop fueled visual style to follow.

When you lay out the story, it is heavily similar to the buddy cop-satire 'Hot Fuzz' in certain aspects. But instead of being a straight-up derivative, it feels more influenced by Edgar Wright and his signature direction style. What prevents this movie from falling into the bottomless pit of overt familiarity is Ninian Doff's quirky direction and the leads; Samuel Bottomley, Viraj Juneja, Rian Gordon, and Lewis Gribben. These four are having a blast on-screen together, bouncing rapid-fire jokes off of each other and getting into endlessly amusing hijinks. They share electric chemistry and it is infectious.

The movie's biggest flaw is a subplot about two bumbling police officers. On paper, these sections should work: two small-town police officers who are completely incompetent at their jobs attempt to solve a mystery; almost like in 'Hot Fuzz'. But here, instead of being laugh riots, they have their stupidity dialled up to the point of being nearly obnoxious. The saving graces that stops this side plot from dragging down the rest of the movie are the committed performances from Kate Dickie and Kevin Guthrie and a conclusion that both feels satisfying and in-line with the rest of what has been set-up.

Poking fun at the real-life Duke of Edinburgh Award, 'Get Duked' is an extremely fun and often hilarious teen comedy about a group of boys being hunted. What it lacks in originality, it makes up for with enjoyable performances from the four leads as well as great chemistry between them, an entertaining story and a killer soundtrack.