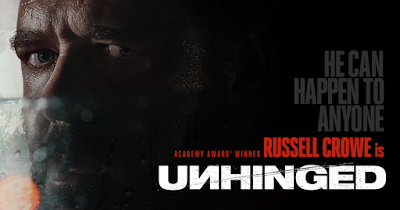 After months of cinemas being closed and productions being shut down due to COVID-19, it is great to finally go back and watch movies on the bigscreen again. The first major release since the lockdown was put in place, 'Unhinged', follows a case of road-rage as it turns into full-blown terror when an unstable driver follows a woman and her son.

Although the movie does have moments of vicious violence and manic mayhem early on in its first twenty-or-so minutes, it doesn't completely go full throttle until a scene at a gas station. From that moment onwards, 'Unhinged' is pure deranged and thrilling entertainment. Those who can't handle violent movie should stay far away from this thriller as it gets very nasty and quite intense at points.

The film's biggest flaw is its screenplay. For the most part, it serves the film very well, being simple yet effective. But it can be let down at points by generic lines of dialogue and some convenient solutions to tricky situations. Thankfully, these flawed elements are very few and far between and don't hinder the experience that much, and compared to other 90-minute thrillers, it could be worse.

At centre stage, and the man who elevates this movie to be an absolute blast is Russell Crowe as the unnamed antagonist, best described as "John Goodman as a psychopath". His fierce presence is felt every time he is on-screen. The unpredictable and unstable nature he gives off, and simply the lack of a motive, makes the character so terrifying.

While 'Unhinged', a fast, furious and brutal thriller about road rage, will mainly be remembered as the first major motion picture to be released into cinemas after the initial coronavirus lockdown, it should also be remembered for its fearsome performance from Russell Crowe and tense sequences.