'The Wolf of Wall Street' Review 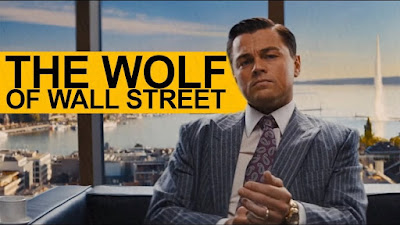 Based on the autobiographical book by Jordan Belfort from 2007 of the same name, Martin Scorsese's three-hour long crime-dramedy biopic 'The Wolf of Wall Street' is a phenomenal film. The movie follows the New York stockbroker rise to success and his downfall after refusing to cooperate in a large securities fraud case involving corruption on Wall Street, corporate banking world and mob infiltration.

Although the movie does glorify the life of Jordan Belfort, showcasing how charismatic, rich and likeable the figure is, but it doesn't do it to the point in where they paint him as the perfect man. There are numerous moments throughout the film that are not shy to show his up himself, arrogant and greedy nature. He frequently indulgences in debauchery, has affairs and commits fraud. With this hefty task, it is incredible that Leonardo DiCaprio didn't crumble under the pressure. While he is truly magnificent throughout the entire film, there are two scenes of note that are two perfect examples of how DiCaprio is one of the best actors working in Hollywood today. One of which is him as Belfort, as he tries to sell penny shares to someone over the phone. His charm is infectious, you'll grin with glee.

With excellent performances from a cast of talented actors, most notably Leonardo DiCaprio's stellar portrayal of the titular wolf, an amazing direction from Scorsese, a smart, funny and borderline satirical screenplay from Terence Winter and great editing from Thelma Schoonmaker, this highly entertaining, endlessly captivating and at times bonkers cautionary tale of corruption and greed is more than deserving of its extended 180-minute runtime.