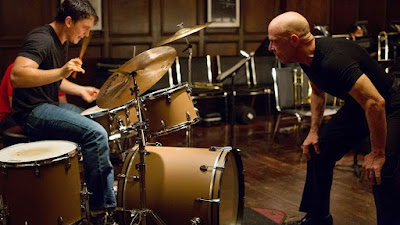 Best described as a constant anxiety attack, Damien Chazelle's second theatrical outing, 'Whiplash', is one of the best drama-thrillers out there.
An extended version of his 2013 eighteen-minute long short film of the same name, this movie expertly explores the inflated male ego and the drastic lengths one would go to accomplish their dreams thanks to its razor-sharp writing, electrifying editing and brilliant direction from Chazelle.
The stand-outs in the cast are Miles Teller and J.K. Simmons. The former gives a great performance as Andrew Neiman, a relentless and determined drummer who won't take "no" for an answer. And the latter giving an equally mesmerising and terrifying performance as Neiman's ruthless and manipulative music instructor.
The movie's slow-burning story leads up to a third-act, unlike anything this reviewer has seen before. With minimal dialogue and mostly told through subtle acting and the amazing music, it'll keep you on the edge of your seat even after the credits roll.
A feature-length version of his 2013 short film, Damien Chazelle's 'Whiplash' is an astonishing movie and one of the best of the last decade.
Labels: Reviews Reviews from 2020