'The VelociPastor' Review
A Funny Satire of Awful Movies 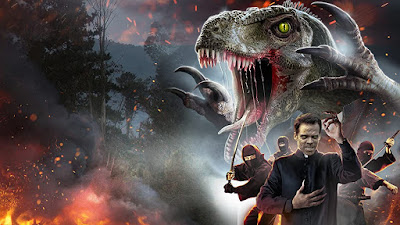 At first glance of the movie's poster or plot description, you wouldn't be alone for thinking it looked terrible, cheap and ridiculous. A low-budget movie about a priest who gains the ability to turn into a dinosaur sounds laughable and on par in terms of quality with all the other throw-away straight-to-DVD trainwrecks, but you'll be sorely mistaken upon watching the final product.
Within the first five minutes of the movie, you can tell what the following 65 minutes will be like: an intentionally bad horror flick that satirizes awful cheap movies. The story follows a priest named Doug Jones who, after witnessing the death of his parents, travels to China and inadvertently inherits the ability to turn into a dinosaur. Although he is horrified by his newly formed power, Doug is convinced to use his powers for good and accidentally puts himself on the radar of cocaine-dealing Christain ninjas.
While appearing to a poorly constructed movie on the surface, to call 'The VelociPastor' a bad movie is missing the point entirely. With the cheesy performances, awful practical effects, indulgent filler scenes, gleeful grotesque violence and outlandish dialogue, this is a hilarious satire on awful guilty pleasure and "so bad it's good" movies that we love and crave so much.
Labels: Reviews Reviews from 2020