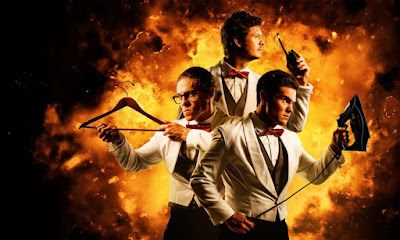 Juvenile, stupid and offensive, those are the three words that perfectly describe 'Game Over, Man!', a raunchy action-comedy from the cast of 'Workaholics'. The movie follows the trio of friends as they try to become heroes when the fancy Los Angeles hotel they work at is taken hostage during a star-studded party.
Given the potential shown in its trailer with the premise, this movie seemed to subvert Netflix's streak of producing bad films. Appearing to be an interesting mash-up of 'Die Hard' and 'Pineapple Express', this could've been a fun action-comedy stoner flick but it tragically ended up feeling like creatively bankrupt filler that's mere existence is to meet a quota.
With awful writing, serviceable performances, hit-or-miss jokes, a confusing twist and some fun moments few and far between, this miss-fire is nothing more than a disappointment.
Labels: Reviews Reviews from 2020