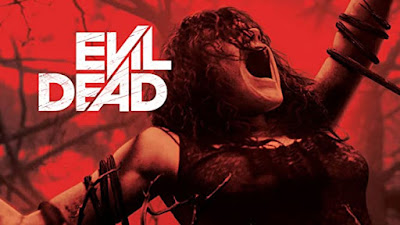 Standing on its own as a supernatural slasher, this movie is an enjoyable gorefest. But as a continuation of the 'Evil Dead' series, it doesn't hold a candle compared to the original trilogy.
Set thirty years after the 1981 movie's events, the story follows Mia, a young woman with an addiction problem, who heads to a remote cabin in the woods with her group of friends to detox. When there, they discover the Book of the Dead and unwittingly summon a force of evil that possesses each of them one-by-one.
From Fede Alvarez, his feature directorial debut, comes this reimagining of the classic horror film 'The Evil Dead'. The film's cold open perfectly encapsulates what follows: a more serious and creepy approach that isn't without its campy moments with the Deadites. While it felt weird at first for a movie, in a series that's popularly known for its comedic tone, to have a far more grim mood, but it worked for what Alvarez was going for.
Sadly the movie falls into common slasher trappings it's predecessors didn't: forgettable characters that feel like they're only there to die and forced and clunky dialogue shared between them. Outside of Mia, there isn't anyone you really care about and whether you mind it or not depends on how much you'll enjoy this flick.
If you're here for gore, you won't leave disappointed. There is a lot of blood and dismembered body parts that'll satisfy the Evil Dead fans. The primary use of practical effects felt like a throwback to the decade in which the series began, with horror films being reliant on physical props for it's gruesome moments compared to CGI heavy sequences of today.
Alvarez' depiction of the Deadites was very faithful to the rules set up in the original films albeit one or two scenes towards the end. They were snarky and clever, more terrifying as they were inflicting emotional pain compared to their gory assaults.

Viewed as it's own thing, 'Evil Dead' (2013) is an entertaining supernatural slasher that is both extremely gory and brutal, but it's ultimately let down by the mostly poor cast of characters, heavy-handed dialogue and the high expectations set by Sam Raimi's amazing originals.
Labels: Reviews Reviews from 2020