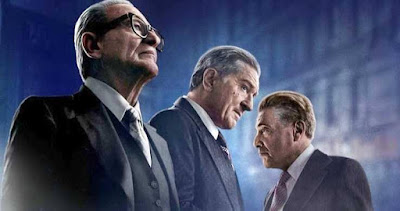 "I heard you paint houses."
Telling the story of World War II veteran and delivery truck driver Frank "The Irishman" Sheeran, narrated by the same aging and retired man, who recounts his possible involvement in the disappearance of American labour union leader Jimmy Hoffa, 'The Irishman' is unlike any gangster  movie, or any movie for that matter, that I've seen. While every single one of the 209 minutes didn't feel necessary, they also didn't feel like filler or a waste of time. Running at 3h 29m, naturally, you would have fears of pacing issues (especially when the movie constantly jumps between time periods) but unusually this film doesn't, all thanks to the masterful editor Thelma Schoonmaker. If you don't have time to watch this wonderful piece of cinema, I highly recommend making the room as it's worth the hype and the extended length.

The ensemble cast was amazing. Al Pacino as Jimmy Hoffa is something to behold. One moment he can be sweet and gentle, next minute he could be yelling angerly at the top of his lungs and then he could be calm yet serious. Robert De Niro does a marvellous job making the audience empathise with such a horrible person. Joe Pesci as Russell Bufalino gives off a cool vibe while simultaneously seeming unpredictable and dangerous.

The soundtrack does a phenomenal job building upon the mood and tension throughout the movie. It's also excellent songs and score such as The Five Satin's famous doo-wop song 'In the Still of the Night'. The digital de-aging is fantastic. Excluding the first scene it's featured in, it was impossible to tell that the de-aging was even there. Rodrigo Prieto's cinematography is absolutely gorgeous. Each shot was pretty to look at, leading me to have my eyes glued to the screen for every frame. For a movie driven by the dialogue and interactions, the writing doesn't collapse under the pressure. The conversations between characters felt realistic and the decisions made by characters as well as the progression of the story was natural.

With the first two-hours and fifty-minutes leading up to the final forty-minutes, a final act in where every choice taken earlier in the film results in a hard left turn into something completely unique and depressing. It showcases the gangster lifestyle in a fresh yet dark light.

The latest in the collection of collaboration between De Niro and Scorsese, which started in 1973, 'The Irishman' is a beautifully shot 209-minute gangster epic worthy of a Best Picture win, with Oscar-worthy performances from the film's cast, most notably De Niro, Pacino and Pesci, an incredible score and soundtrack, and a third act that nails the ending perfectly.
Labels: Reviews Reviews from 2019