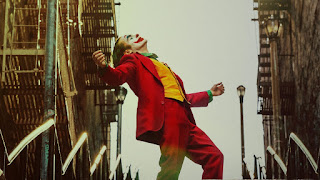 'Joker' directed by Todd Phillips, most famous for directing 'The Hangover' trilogy, and starring Joaquin Phoenix as the titular character. The movie follows Arthur Fleck, aka Joker, a failed stand-up comedian and clown, and an outcast in society as he slowly descends into madness. This isn't a comedy like what Arthur says, it's a tragedy of a broken man, a loss of his innocence, and the revenge he takes on the society and people that broke him.
The movie seems to be heavily inspired by Martian Scorsese directed films, most notably 'The King of Comedy'. Several scenes contain the essence of that film.
While the film makes you empathize with Fleck and feel sorry for the way Gotham and it's people treat him, but at no point does the film try to redeem his character or show his horrific crimes in a positive light. Arthur Fleck is truly a despicable person.
Joaquin Phoenix is, in every sense of the word, phenomenal. His performance as a madman is disturbing. The demonic laugh is deeply unsettling and saddening once you understand the circumstances. His spontaneous behavior made the character more terrifying and unpredictable. While there are actors who are worthy to win Best Lead Actor such as Taron Egerton for his amazing performance in 'Rocketman', no one this year, as of yet, has come close to delivering a performance as good as Phoenix's. He is the best Joker to date.
Though this movie is mainly Phoneix's and told from Fleck's perspective, I don't recall a single scene that doesn't feature the character, the film has a solid supporting cast. From Zazie Beetz to Robert De Niro, everyone did an amazing job. While De Niro's appearances in the film are minimal, he does a marvelous job as a talk show host and an influence to Arthur.
Lawrence Sher, who also did the cinematography for 'Godzilla: King of the Monsters', captured the craziness and darkness of Gotham during the crown prince's reign. Bringing depth to the scenes it's featured in, the score by Hildur Guðnadóttir is dark and moody. Coupled with Sher's cinematography and Phoenix's incredible performance, the movie had a very uneasy atmosphere that made the viewing experience uncomfortable and unnerving (in a good way).
Same as 'Get Out', this movie demands multiple rewatches. Not because of a confusing plot but because the movie can be interpreted in several different ways. No audience member would view the movie the exact same.
Todd Phillip's 'Joker' is a spectacular masterpiece, worthy of a Best Picture win, that boasts my personal favourite movie performance of the year from Joaquin Phoenix, brilliant cinematography, creepy but beautiful score, combined to make one of the best, most brutal, most unforgettable pieces of cinema of 2019, nay of all time!