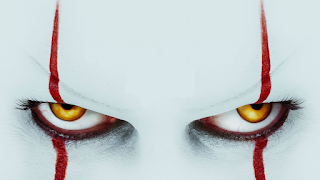 "Let's kill this f*cking clown!"
Given that I believe 2017's 'It' (★★★★★) to be a "the peak of cinema" and "the best film ever made", I never expected 'It: Chapter Two' to be as good or even better, but it is a worthy continuation and conclusion to the 'It' saga, cementing Andy Muschietti as one of the best horror directors.
From the horrifying opening sequence to the iconic Jade of the Orient scene to the great epilogue, 'It: Chapter Two' is filled with amazing scenes.
The cast is perfect. Every member of the Losers' Club, young and old, and the movie's short supporting cast are phenomenal. The stand-outs are definitely Bill Hader as grown-up Richie Tozier and Bill Skarsgård as Pennywise the Dancing Clown, who like Robert Downy Jr. with Iron Man, was born to play the murderous clown and best villain of all time.
While not being as terrifying as the first film, it still has a handful of great scares and frightening set-pieces. The film also makes up for the narrow amount of scares with being incredibly entertaining throughout the entire almost 3-hour runtime and being hilarious. Pennywise may not be in this film as much as the last, but Muschietti uses the movie's villain sparing, making his limited appearances scary and worth the wait.
The CGI really worked for me. The de-aging of the young Losers' never bothered me but it was noticeable especially with Finn Wolfhard and Jeremy Ray Taylor. Despite having an abundance of CGI creatures and centric-scares, it never felt overused nor excessive.
I'm so happy to with how Warner Bros. allowed director Any Muschietti to create such a fantastic film with lots of depth and layers, instead of the straight-up horror flicks other studios chern out every year.
I have to applaud the film for not romanticizing its dark themes and elements. Even though the film depicts scenes of horrific hate crimes and disturbing domestic violence, it never shows it as a good thing.
With its 2h 45m runtime, I was expecting it to drag on and feel slow. I'm happy that it wasn't the case, for me.
The only problem the film has is what they did with Stanley Uris. For spoiler reasons, I will not say what he does but what he does do is absolutely heart-breaking, terrible and should never be repeated by anyone. The explanation given in the book makes more sense and works with his character, but the explanation given in the film made zero sense. I wish they were more faithful to the book when they did what they did with Stan.
With a perfect cast, Bill Hader and Bill Skarsgård being stand-outs, an emotionally-rich story, terrifying scares and thrilling set-pieces, 'It: Chapter Two' is not only the best horror film of the year (so far) and one of the best films of 2019, it's also an almost flawless continuation and conclusion to the 'It' saga.