'Dark Phoenix' Review
Now for Disney to Take Over 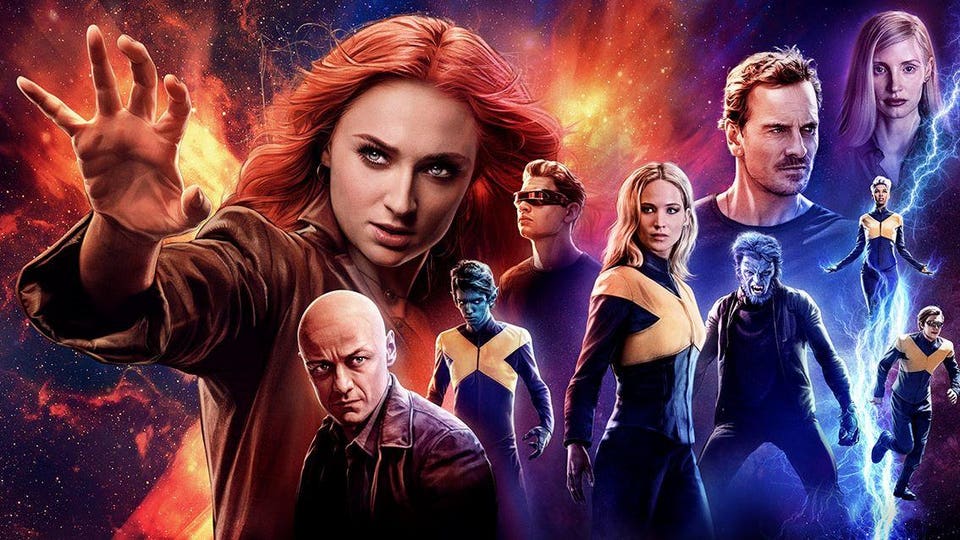 Rating: ★½
'Dark Phoenix' is directed by longtime series producer Simon Kinberg. And is the 12th and final X-Men film made by 20th Century Fox.
Thankfully this movie isn't as bad it's predecessor, 'X-Men: Apocalypse' (★½), but this is due to the fact that once I got out of my seat and stepped out of the cinema, I had forgotten everything that had happened in the past 1h 54m. The reason why I gave this movie ★½ but don't actually hate it is because I don't remember much of the film to give me a reason to hate it. If you were to ask me what the plot was about or who was bad and who was good, I honestly couldn't tell you. This was due to terrible editing, outrageous cinematography and poor acting. All of that rolled into one, made a dull, forgettable movie.
Even though the finale on the train was the best part of the film, it was bogged down by the bizarre editing, awful shaky cam and bad visual effects.
Sophie Turner didn't do her best as her portrayal of Jean Grey. Even though the movie is about her, it never really was about her. The movie is too focused on Charles, Magneto and basically any other character, except Quicksilver.
Quicksilver is one of my favourite characters from the X-Men films I've seen. His slo-mo scenes were the highlights of 'Days of Future Past' and 'Apocalypse'(★½), but sadly he disappears from the movie a quarter way through, wasting one of their best characters.
Jessica Chastain sadly didn't do anything special as movie's villain. You could have swapped her out with any other actor, and they would have done as good as her. Not to say it's all her fault. She said in an interview, due to reshoots changing her character so much, she didn't even know who she was playing in the end.
Magneto is still awesome but don't do him as much justice as he deserves.
The best actor from the film is James McAvoy. I didn't think he was amazing, but he did stand out in an otherwise dull film. If you want to see how great of an actor he can be in a superhero movie, watch 'Glass’ (★★★★).
All the actors in this film deserve better.
By the time this film ended, I had already asked myself "Why does this film exist?" several times. All the movie does is retell a story that was apparently done poorly in 'X-Men: The Last Stand', confuse the timeline by killing off characters and changing around key points, and make me wonder "Why hasn't any of the cast aged a day over the 9-30 years that they have been in this series?".
You can tell that he is a first-time director due to seeing his final product, but I hope he learns from his mistakes that he made in this movie and improves on them in his next films.
If you're a die-hard fan of the X-Men, you might enjoy this film a lot. But casual viewers, probably not as much.
Labels: Reviews Reviews from 2019