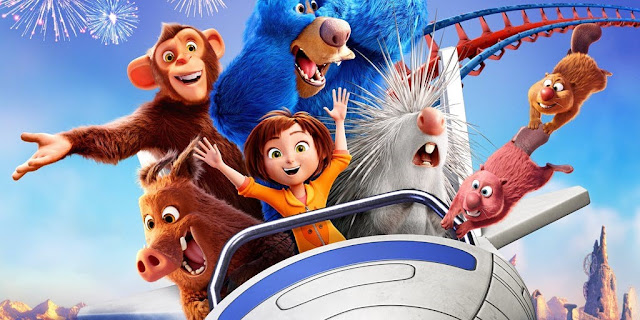 Rating: ★
Wonder Park stars Brianna Denski as June, Mila Kunis as Greta the Warthog, John Oliver as Steve the Porcpine and Matthew Broderick as Mr Bailey and according to IMDb, this movie is directed by no-one, and it shows.

This movie wasn’t as bad as I had expected. I had watched the ending several times while waiting for it to finish so I can clean the cinema and it was terrible. From what I saw, it seemed to be a half star film, but I was wrong, it is a one-star film. I had three hours to kill in between shifts and after watching Tim Burton’s ‘Dumbo’ (★★½), saw I had an hour and twenty left and decided to watch ‘Wonder Park’. Staring at a blank brick wall for an hour and twenty minutes would have been better. While lining up before the entering the cinema, there were a least two families look at me and probably wondering why a fifteen-year-old boy would go watch a movie that is made for kids that don’t go to school yet, and my answer to them would have probably been: “Why not?”.

The 3D-CG was terrible and at times an eyesore. The cinematography by Juan García Gonzalez was awful. Some shot was shaky and hard to see while others had the weirdest angles and were hard to look at. The editing by Edie Ichioka was horrible. One shot a character was on the opposite side of the room and in one cut, the next shot had them on the other side of the room.
The score by Steven Price, the composer from ‘Baby Driver’ (★★★★½), was generic. The score was a blend of other better scores from better movies. Don’t even get me started on how bad the script was.

This script by Josh Appelbaum and André Nemec was atrocious. The word “splendiferous” was used several times throughout the final 10 minutes of the movie. It got annoying after a while.

This wasn't funny. There was a joke towards the end where I remembered laughing at which was a very inappropriate joke for the target audience. The reasoning for me laughing wasn't because that it’s actually funny but because it’s a so bad and out of place, I had to let out a laugh. The voice acting was dreadful. Half the time I wasn’t sure if the voice actor for June was a boy or girl and Banky had some many voice cracks. It felt like they took one take for everyone's line, didn't care if it was good and put it in the film.
While writing the paragraph above, I ran out of synonyms for words such as “horrible” and “awful”.

The reason I didn't give this film a ½ is because there were some things I sorta liked. Even though it wasn't original, the messages this movie were giving young kids were good. The two songs featured in the film are surprisingly good and didn't get on my nerves and kids definetly had a good time with it. This is evident as a four-year-old near yelled towards the end: "This is the best movie ever!". Also, I did like the premise which was "What if Finn from ‘The Lego Movie’ (★★★★½) and ‘The Lego Movie 2: The Second Part’ (★★★★) entered the world he had created out of lego?"

Sadly, the limited amount of good things could save this movie. A lot of talent was wasted on this movie and it's truly sad. It feels like 'Wonder Park's only purpose is to make money (which it barely made a profit on),  sell toys,

Bonus Content:
I want to leave you with one thing: Why is the park, the location of majority of this movie, called Wonderland and not Wonder Park, the title of the movie?