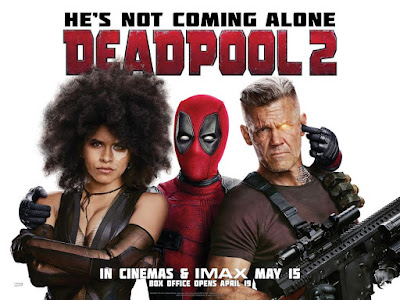 Sorry for the delay but here it is. I hope you enjoy my review of David Leitch's Deadpool 2.

WARNING:
Before I say anything about this movie I would like to say that I won't be saying too much about the plot of this movie as you aren't really told what is truely is about in the trailers and I think it is a spoiler that you definitely should know until it happens in the movie. It is something you would expect happen in this movie, but it does.

To start off my review I would like to say that Deadpool 2 is a brillant sequel to 2016's Deadpool. I reckon it is better than the first film, but that is my opinion. It does some much right and a tiny bit wrong.
How this review will go is I do all the bad stuff first and end on the good stuff.

One of the worst things about this movie is the pacing and tone. It starts slow, even for an action scene at the beginning, and then becomes faster paced and more of a Deadpool movie that we expected. The tone of the beginning was a bit dark and stressful (by what I mean is that it is a bit mysterious and my heart beated really fast). It did get better towards the 2/4 line but I didn't like that.
T.J Miller's character, Weasel, wasn't really needed in this movie. He wasn't really the comic relief like in the first movie. He does something a bit dumb around the half-way line.
That was all of the stuff that I really didn't like about this movie. Also I didn't really understand why X-Force was in this movie as throughout the first film, Deadpool would say that he is a solo act. But in this film, he isn't. Even though I'm putting this in the things that I didn't like about the movie section, I did really enjoy X-Force. The CGI wasn't the best. At the end of the movie, there is a big fight that is heavily relying a lot on CGI and it looks like a cut scene from an early PS3 game.

Now for all the good stuff!
I liked what they did with one of the characters from the first film. It was different and unexpected. That is why I liked it.
Deadpool is brilliant as always (except for X:Men Origins: Wolverine, we don't talk about that). You can tell that it is Ryan Reynold's film. You can tell he put a lot of effort into this movie.

The soundtrack of this movie of good. It included songs such as 'Welcome to the Party' by Diplo + More, 'Ashes' by Céline Dion and 'Bangerang' by Skrillex. It has other wacky and funny songs as well as good songs in general.

Josh Brolin is on strike. He was jaw-dropping amazing as Thanos in Avengers: Infinity War, being a villian that you can somehow get behind (even though he wants to KILL HALF THE UNIVERSE!). He is here, the second Marvel movie in three weeks, delivering an amazing performance as Cable, the cyborg-ish from the future. After seeing and hearing about the future and finding out why he wants to kill Russell/Firefist, you understand where he is coming from. That is until you realize he wants to kill a 14 YEAR OLD KID!

Talking about Russell/Firefist, Julian Dennison was great in this movie. He was charming and sympathetic. When you see how he has been treated throughout his life, you understand why he has been doing these things and why he wants to do his big plan at the end of the movie.

This movie was hilarious! As I said eariler, some scenes are insanly funny. I could hold back the tears! Not all the jokes landed but most of them did. But this movie also had a lot of heart to it. It was emotional at times and this whole movie's plot is based around an event that happens around the beginning.

Peter is a great character. If you haven't seen the final trailer, Peter is powerless, normal human who saw the ad to join X-Force and comes for the ride because he thinks it would be fun. I love Deadpool's nickname for Peter, Sugar Bear.

In the end, this movie was amazing. It was funny, sad and action-packed and the superhero movie that everyone needed to cope with the emotion rollercoaster that was Avengers: Infinity War that came otu three weeks before.

I recommend this movie to  fans of action movies, comedies, superheroes and Deadpool.
I give Deadpool 2 a 9.5/10

I hope you enjoyed my review and hope it was worth the wait!
Have you seen Deadpool 2? Did you like it? Comment down below and I will see you next time!
By the way, this Wednesday I'm posting my first ever 'Movie Opinions'! In this blog series I answer your movie related questions with my onus opinion. Please leave your questions down below in the comment section.
Thanks
Labels: Reviews Reviews from 2018